Usually, when someone is getting ready to go out to a music festival, the only concern that they have is the music. I’m not here to discount this; the music is—and should be—the first thing that we look at when we’re trying to figure out which festivals are worth our time and which to avoid. After all, who wants to go out to a jazz festival if they hate jazz?

But music isn’t the only thing that we should be thinking about. If you think about the necessities needed to stay alive, music isn’t really at the top of the list. Sometimes we forget about the basics just because we’re so excited to see our favorite groups up on stage.

That’s why food and drink are such an important part of every music festival. When these things are done right, they make the music so much better. Now, you might not think too much about food and drink on a daily basis, and that’s okay. Really, it’s good not to have to worry about these things. But, head into a festival that doesn’t have anything available, or worse, has a bunch of stuff available that’s not to your liking, and you will quickly see just how important these things really are. 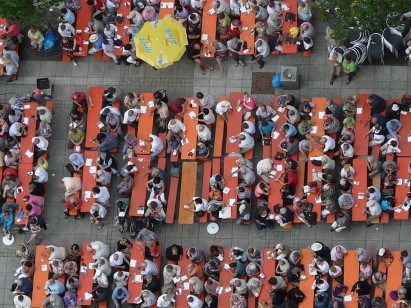 Who doesn’t love good beer? And having your favorite beer while you’re chilling and listening to some of your favorite music is even better. So, why not look for both when you’re planning your next music festival?

There are several festivals out there that are dedicated to bringing you the very best when it comes to both music and beer. Now, this might not be the top priority of every single festival, but if you’re hoping to get the most out of your concert-going experience, then this just means that you’ll need to be a little pickier about what you go to.

And that’s okay. It’s way better to go to just the right festivals instead of anything that comes your way. When you find just the right combination, the festivals that you do go to will be so much better than what you’ve experienced in the past.

Food is another thing that you should be looking at. Who wants to be at a show and be hungry? Food is one of the basic necessities of life, so why do festival organizers sometimes forget that well-fed people are happy people?

I’m a fan of bacon (who isn’t, though?), but it’s not always realistic to expect this delicious meat to be served at every festival you go to. However, you should expect to get good food when you go out to a show. If not, you’re in the wrong place. That’s one of my big goals here with this site—to help direct you to the shows that will give you the best in this very important area.

Depending on where you live, you may have great access to festivals, complete with great music, food, and drink. Some parts of the U.S. are renowned for having awesome festivals, one after another. Other parts are not quite as lucky. However, if you have the chance to hit up a festival in the near future, remember that just looking at the band lineup isn’t quite enough. There are a ton of other factors that go into having a great time at your next music fest, so be sure to check out what food vendors will be there, what’s being served in the beer tent, and what the other accommodations will be. When a festival gets it just right, it stops being just a concert and becomes something much more enjoyable.